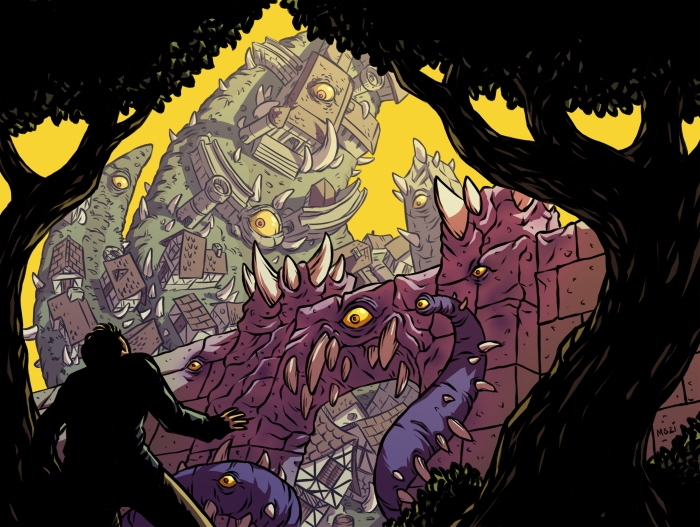 The Border Kingdoms have always been a land of internal conflict – adventurers proclaim themselves sovereigns, outlaws wrest riches from aging rulers, and the edges of territories ebb and flow like waves on the shore. However, a new threat from afar emerges. The magocracy of Thay sweeps across the east of the Border Kingdoms, bringing with them alien weaponry and conquering all within their path! Will the fractured lands of the Border Kingdoms unite in time to drive out a common enemy and discover the true motive behind this sudden invasion?…

…From the western shore of the Border Kingdoms, reports of the city of Yallasch fragmenting into impossible orientations and attacks by warped beings have driven citizens out of their homes. Adventurers from all over the realms heed the call for aid, sponsored by one of the tyrannical Lord High Mages of Adaerglast who have long coveted Yallasch. Yet internal strife suggests that another objective exists, one that could threaten the stability of the Border Kingdoms and the very fabric of reality.  How can the adventurers stop this otherworldly phenomena and what powers are responsible?…

…Remnants of the events of Yallasch continue to persist in the nearby Jundarwood. With their original machinations foiled, a powerful entity of multiple worlds seeks to establish a new foothold in Faerun. Preventing entry will require our heroes to traverse twisting multiplanar crossroads and confront the entity that controls them…

These Adventurers League legal modules were written for Season 4 of the Border Kingdoms, which premiered at at 2021 Gamehole Con. The Loresmiths (creative team and project managers) for this season included Joe Alfano, Tim Mangan, Rick O’Donnell, and Ethan Yen. Tim Mangan served as lead editor. Cover art by Matthew Sargent.