I am now back home, safe and sound. The past five days may now just be memories, but they have certainly made quite the impact on my views of life, the universe, and everything. The day started off (thankfully) a little later than the previous two days. It turns out the venue for our last panel was in the Forte de Copacabana, which was just 20-30 min. by foot down the beach from our hotel. After checking out of my hotel room and having a light breakfast, the three of us took a cab down to the Forte where we were met by a Siemens representative who handed us our admittance wristbands. 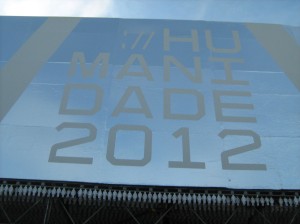 Actually, to be completely accurate, the venue of the last panel, which was part of The Urban Summit, was on top of the Forte in a temporary structure called Humanidade 2012. The structure is quite architecturally appealing, complete with exposed scaffolding and beautiful ocean views. It must have been quite the structurally engineering feat, and it is somewhat sad to know that the building will be taken down eventually. After the gates were opened, we walked up a series of ramps into the main chamber of the building where the Urban Summit would take place. We were handed a tote bag filled with booklets about city development in Rio/Brazil and publications by Siemens. While handing out tote bags and booklets may not seem the most sustainable practice (it probably isn’t) I can’t help but feel excited when I get free informational booklets like the ones I got. I probably won’t ever go through all of them, but it’s nice to have them in physical form. It appears that Siemens has a very large presence at Rio+20, as evident by the first Panel during the Urban Summit, which included the Head of Corporate Communications – Stefan Denig who facilitated the panel, Dr. Roland Busch who we had dinner with the previous night, and the CEO of Siemens Brazil – Paulo Stark. Hopefully we will see many more companies following Siemens example in leading the charge in Sustainable Development around the world. 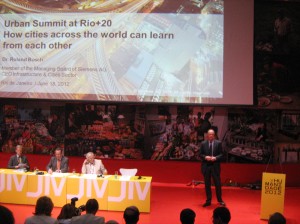 The Panel was a different experience that the ones we attended the previous day. Here, in Humanidade 2012, there was a much larger and international crowd, something that followed more closely with my vision of a UN event. There were translators in the back, cameramen tucked in one corner, and just an overall feel of something big and business-like happening. Dr. Busch was the first to present, explaining the Green City Index (which was the basis for the Future Influencer’s idea) and encouraging cities to learn from other cities’ best practices. The overall Panel focused on this topic, with special emphasis on Rio de Janiero and it was encouraging to know that politicians and business leaders were communicating and supporting collaboration.

After the opening panel, we managed to stay for the second panel “Basic Services at the core of Sustainable Development Goals” and while I honestly want to say I learned from it, it was difficult seeing as the majority of this panel was conducted in French. We did utilize the time and excellent wifi to start writing our blog posts for the Future Influencers Community. Sadly, our agenda did not include the entire Urban Summit, which I would have liked to attend, but after the second Panel we headed out to lunch, finding a restaurant on Copacabana with a beachfront view.

Once back at the hotel I called for a taxi and headed to the airport for my trip home, saying my goodbyes to Rashiq and Kali. Hopefully I’ll see them again sometime. My trip home went smoothly (a lot smoother than my trip to Rio) and I was glad to finally be home among familiar faces. While I didn’t attend the actual Rio+20 Summit (I don’t know if I’d want to be surrounded with so many politicians…shudder, kidding…just a little bit), I did manage to immerse myself in not only the Rio culture, but the Rio+20 culture these past five days and gain a new, more international perspective on the world and sustainable development. There’s still a lot I haven’t seen within the City itself, and that only gives me an excuse to go back to Rio some day in my lifetime. I’m incredibly thankful to Siemens for giving me the time and opportunities while at Rio and thankful for all the friends I’ve made while there, I certainly hope to see all of you again someday. But now, I’m back home, typing in my room, and looking for more opportunities out there for me, hopefully I can find them.

Rio, it’s certainly been a pleasure.